Congratulations Mr Joe Biden & the US

Irish people love nothing more than to dig up Irish ancestry for anyone who wants it! We even found an Irish cousin for Barrack Obama, albeit his eighth cousin it still counts! They happily claimed Obama as one of their own in the small village of Moneygall, Co Offaly back in 2011 and brought him to the site of his ancestors former home. 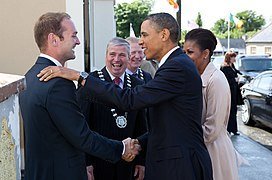 Joe Biden can trace his Irish roots back to both the Blewitt’s from Ballina in Co Mayo and the Finnegan’s from Co Louth. That is not Ballina’s first entry to the history books. Mary Robinson served as the seventh President of Ireland from 1990 to 1997, becoming the first woman ever to hold this office. She promised ‘a new Ireland’ and delivered on this by invoking massive change in Irish society. She continues to work as an environmental activist and a human rights campaigner.

There is great hope that Joe Biden and Kamala Harris can make similar changes in America. We wish them both well and we will be more than happy to welcome President Biden and VP Harris to Ireland over the next four years – now we just have to quickly find some cousins for Kamala.

Human beings suffer,
They torture one another,
They get hurt and get hard.
No poem or play or song
Can fully right a wrong
Inflicted and endured.

History says, don’t hope
On this side of the grave.
But then, once in a lifetime
The longed-for tidal wave
Of justice can rise up,
And hope and history rhyme.

So hope for a great sea-change
On the far side of revenge.
Believe that a farther shore
Is reachable from here.
Believe in miracles
And cures and healing wells.

Call miracle self-healing:
The utter, self-revealing
Double-take of feeling.
If there’s fire on the mountain
And lightning and storm
And a god speaks from the sky

That means someone is hearing
The outcry and the birth-cry
Of new life at its term.
It means once in a lifetime
That justice can rise up
And hope and history rhyme.